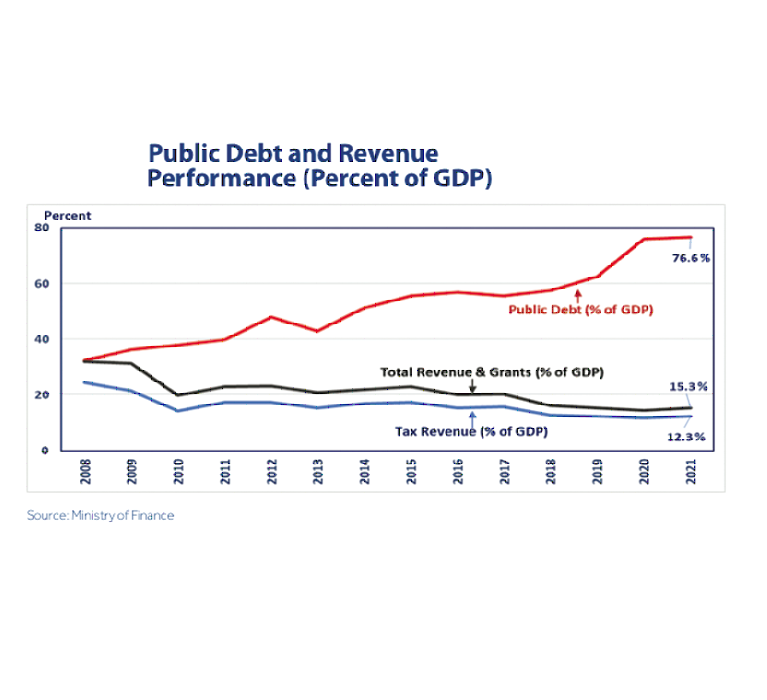 OVER the past 18 months, interest rates on government debt in the UK, Eurozone and US have risen significantly.

This is in response to underlying inflation figures exceeding market expectations. This development puts upward pressure on the interest rates of any new public debt for Ghana and presents a dynamic where existing debt must be refinanced at a higher rate.

This situation could accelerate the risks associated with over-indebtedness and create an acceleration in the depreciation of the cedi and in domestic inflation.

Any policy/expenditure implemented must take into account the global macroeconomic cycle in order to maximize any debt proceeds.

Implications of excessive debt accumulation on the economy

The recent increase in public debt has long-term implications for the economy. Empirical evidence on the impact of debt on the economy suggests that excessive debt accumulation can lead to over-indebtedness.

At one level, which the IMF defines as 60% debt to GDP for developing countries, potential over-indebtedness discourages domestic and foreign investment because of the higher marginal tax rates such investments are likely to face. .

The magnitude of the increase in debt in recent years raises concerns about its implications for public spending and domestic revenue mobilization.

When a developing country’s debt-to-GDP ratio exceeds 60%, the following actions are likely to occur when public budgets have to meet estimated debt service needs: (i) reductions in public spending; (ii) step up domestic revenue mobilization efforts.

The first poses a challenge to public spending that affects poverty-reducing social sectors and investments in critical infrastructure with implications for current and future economic well-being.

Evidence from the literature shows that most countries in SSA respond to rising debt levels by reducing social and investment spending (AfDB, 2018; Mahdavi, 2004; Mello, 2008).

This is clearly illustrated in Figure 19. Since 2015, interest charges on public debt have exceeded spending on health and education.

Therefore, it is of crucial importance for the government’s fiscal consolidation efforts to target recurrent expenditure, such as interest charges due to over-indebtedness, and not social or investment expenditure, as this would undermine the acceleration of growth, reduction of poverty and progress of the country. towards achieving the Sustainable Development Goals.

In recent years, Ghana’s revenue mobilization efforts have lagged behind the pace of debt growth.

It should be noted that at the end of 2021, employee compensation (including wages and salaries, pensions and gratuities and other salary-related expenses) and total interest payments accounted for 47.5 % and 50.4% of domestic revenue.

The generally low tax base is a cause for concern, and innovative strategies that would enhance revenue mobilization efforts without compromising the well-being of vulnerable people in society are urgently needed.

The government has proposed to introduce an “Electronic Transaction Levy” or “E-Levy” in the 2022 budget, with effect from February 1, 2022.

The tax is imposed on mobile money payments, bank transfers, merchant payments and incoming remittances which will attract a rate of 1.75%, payable by the sender, except for remittances. incoming funds, which the recipient will bear (Ministry of Finance, 2022 Budget).

Although the levy should widen the tax net, at least in the short term, the burden will likely fall more heavily on the side of the market that is less sensitive to changes in transaction costs due to the imposed levy.

In other words, the relative responsiveness of supply and demand for electronic transactions will determine the welfare impact of this tax. Demand could be less responsive and therefore negatively impact consumers.

Public debt undermines the outlook for the single currency (Eco)

The proposed Eco, whose introduction is now scheduled for 2027, is based on the achievement of a convergence criterion composed of four primary criteria and two secondary criteria.

Key criteria include single-digit inflation at year-end, fiscal deficit, including grants, not exceeding 3% of GDP, central bank financing of fiscal deficit not exceeding 10% of previous year’s tax revenue and gross foreign exchange reserves of at least 3 months of import cover.

The secondary convergence criteria are an exchange rate depreciation not exceeding 10 percent and a debt-to-GDP ratio not exceeding 70 percent.

Public debt is considered the most important criterion because its sustainable achievement will be a launching pad for the achievement of the remaining criteria (Olowofeso et al, 2021).

Moreover, it will not be necessary to use external reserves to support exchange rate stability. Ghana’s public debt exceeded the convergence threshold of 70% of GDP from 2020, putting the country at high risk of debt distress.

The effects of the level of public debt on compliance with the convergence criteria are exacerbated by the growing component of external debt. This amplifies the sensitivity to external shocks.

The Ghanaian Cedi is experiencing one of its worst performances in recent times, depreciating by around 22% in the first five months of 2022.

This forced the Bank of Ghana to intervene at the risk of international reserves. Inflation for May 2022 is at an almost 30-year high of 27.6% (Bank of Ghana).

High public debt, a weaker currency and rising inflation are driving up the cost of borrowing as investors seek higher returns for the elated risks associated with Ghanaian government instruments.

The resulting high interest charges are pushing the current account deficit well beyond the 3% envisaged for convergence. The international capital market has also become inaccessible in Ghana, implying greater pressure for Central Bank financing of the government budget deficit.

The lack of access to the international capital market leaves the government little room for maneuver except to crowd out the private sector from the domestic market.

This is reflected in the increasing allocation of bank assets to investments in government securities. Ghana is also becoming vulnerable to predatory bilateral lenders. Both work against GDP growth.

Unsustainable levels of public debt not only have dire consequences for the sustainability of the country’s economy in the short term, but also hamper its medium and long-term prospects, including the benefits associated with belonging to a monetary union. regional like the Eco.

Which 49ers RB to target in the Fantasy Week 2 waiver thread? Jeff Wilson vs. Jordan Mason vs. Tyrion Davis-Price