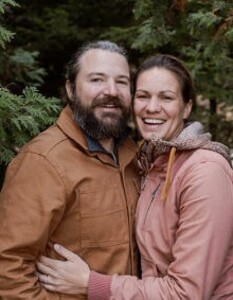 On Saturday, November 13, 2021, Adam Kendall and Kate Leese perished in a commercial plane crash on Beaver Island. It was a flight they’d taken dozens of times since they traveled to the remote island 30 miles northwest of Charlevoix to start a vineyard on an old farm five miles from town isolated from Saint James. The vineyard was the last stop for the couple who had embarked six years earlier in an art of living wandering in a reorganized draft in search of new horizons.
They loved each other very much, roaming the great American West, sleeping on public land, armed with more Verizon Wi-Fi accounts than they wanted to admit, from which they ran a successful disaster management consultancy. . Their companions were two tricolor dogs; a sad and peculiar basset hound named Frank and his cheerful younger brother; a Bernese named Baker. They met people along the way and wrote about life and took photos of the trip. She knew how to cook and so did he and they often did; small intimate meals for the two of them and that wonderful three-tipped roast beef for large gatherings.
Born on the same day in November two years apart, they both spent the summer on the water in Charlevoix as a teenager, the two proverbial ships passing at night, but it was fifteen years later in 2013 thanks to a mutual friend they met. He lived in Seattle and “happened” to return home to Jackson for a cute date scheduled. The second date, she flew to Seattle, they did their shopping in a market, and he cooked her a meal from scratch. They were married on August 1, 2015 at Samels farm under a giant oak tree on a golden summer day. Years later, they returned to Charlevoix County to take a break from their wandering and plant 2,100 grape roots in the fine limestone soil of Beaver Island.
Survived by their parents, Rob and LeeAnn Kendall and Alan and Chris Leese; siblings, Rob Kendall and Josh, Kyle, Amanda and Colton Leese.
They died with their arms folded with the dogs on their knees in a moment of immense cruelty. They were entangled in death and as they had been in life and as they had entangled everything they encountered in their many sojourns. We miss their love and the joy they brought. Kate is also survived by a grandmother, Ardith (Tootsie) DeGraff; and predeceased by grandparents, Robert (Corkey) DeGraff and Roy (Esther) Leese.
Services for Adam and Kate will be held at the Center Point Assembly of God Church, Charlevoix, at 3:00 p.m. on Sunday, November 21, 2021. Visitations will be held at the church on Saturday, November 20, from 7:00 p.m. to 9:00 p.m., and on Sunday 21 November from 2 p.m. to 3 p.m. You can live stream the funeral via facebook at https://fb.me/e/4i4vLd3bC
To honor the life of Adam and Kate, families invite gifts to the Beaver Island Enrichment Fund at the Charlevoix County Community Foundation. Checks made payable to the Charlevoix County Community Foundation, with Adam Kendall and Kate Leese on the memo line, can be sent to C3F, POB 718, East Jordan, MI 49727. Gifts can also be made online on www.c3f.org using the Make a gift tab.
The arrangements are entrusted to the Charlevoix Chapel of the Mortensen Funeral Homes. Sign his guestbook online www.mortensenfuneralhomes.com

Bring Christmas to the Boys’ Ranch