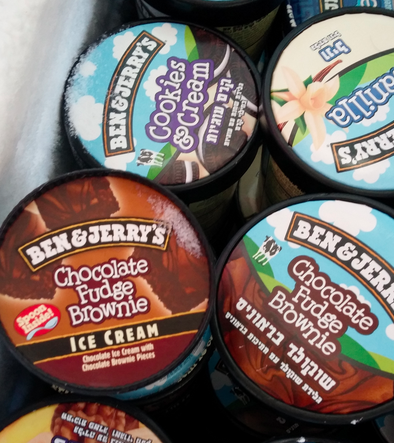 (JNS) For the first time in the history of human rights, an international mega-corporation has attempted to coerce a food apartheid licensee. This unprecedented contract demand has prompted a landmark lawsuit asking whether it is legal to attempt to force a food licensee to discriminate against entire communities, especially ethnic ones. More distilled, the lawsuit asks to enforce the fundamental right to be fair, ethical and legal.

The litigants are “David,” the tiny licensee of Ben & Jerry’s in Israel, against the “Goliaths” twins, Ben & Jerry’s of Vermont and its billion-dollar parent company, multi-brand giant Unilever.

Ironically, the effort to constrain this food apartheid comes from none other than Vermont-based so-called social values ​​icon Ben & Jerry’s. The famous funky ice cream brand – operated by aging millionaire hippies Ben Cohen and Jerry Greenfield – demanded that its longtime Israeli licensee stop selling in East Jerusalem, as well as Judea and Samaria, also known as West Bank. These regions are mostly populated by Arabs.

From the start, Ben & Jerry’s Israel owner Avi Zinger knew he could not comply with such an illegal request. In Israel, where entire communities and villages are historically ethnic, commercial discrimination by ethnicity, neighborhood or geographic location is strictly illegal. The United States has enacted laws prohibiting similar “redlining” activities by food distributors, service providers and financial institutions.

Ben & Jerry’s Israel could no more massively boycott the Arabs of Nabi Selah or Hebron than it could the ultra-religious Jewish neighborhoods of Bnei Brak or Mea She’arim. If an Israeli food company tried to implement such discrimination against Arab neighborhoods, it would – within hours – become the subject of global protests by an alphabet of human rights groups, backed by government affairs ministries. foreigners from all over the world. But Ben & Jerry’s, now commandeered by anti-Israel BDS zealots, seems determined to coerce its Israeli licensee into targeting Arabs, along with many Jews, in its sales areas, in violation of Israeli law. , international law, and Zinger’s conscience and meaning. decency.

When Zinger balked at the unlawful discrimination, Ben & Jerry’s – backed by Unilever executives – informed Zinger that its license would not be renewed at the end of 2022. Ben & Jerry’s and Unilever said Zinger would be replaced by someone willing to stop selling in East Jerusalem, as well as in Judea and Samaria, to both Arabs and Jews. This, the world was told, was for the good of mankind; presumably, because if a Jewish child on one side of the street in Jerusalem can enjoy a cold ball but an Arab child on the other side cannot, we and they are all helped.

A demand for redlining is very different from withdrawing an entire company from countries engaged in genocide, like Russia, which is now burning down Ukraine, or China, which is now trying to wipe out a million Uyghurs. It bears repeating that Unilever continues to make millions of dollars a day in Russia and China while citing a humanitarian motive in denying tens of thousands of Arabs a scoop of ice cream.

In fact, Ben & Jerry’s and Unilever want to stay in Israel, but on condition that its licensee, Avi Zinger, stop selling in East Jerusalem, Judea and Samaria. This food apartheid is further complicated by the fact that Unilever also owns a majority stake in Strauss Ice Cream in Israel, so any Israeli market share they take away from Zinger may go directly to Unilever via Strauss sales.

Importantly, the delicate balance of Unilever’s control over Israel’s two major ice cream brands has been the subject of Israeli antitrust action and a binding consent decree. This executive order specifically prohibits both Unilever and Ben & Jerry’s of Vermont from interfering with the Israeli licensee’s store and distribution plans.

Article 4 of the decree stipulates:Unilever and/or BJH [Ben & Jerry’s-Vermont] shall not have the right to determine for the Licensee the conditions for marketing Ben & Jerry’s products in Israel; Unilever will have no say in the Licensee’s decisions regarding the terms of engagement with retailers, the scope and timing of engagement, and the opening of retail ice cream shops, their locations and prices of Ben & Jerry’s products at these lounges. Unilever and BJH, including all of their officers, should not contact the Licensee directly or indirectly about this matter. »

Article 5 states: “BJH, Unilever and Strauss Ice Creams will not engage in any activity that may interfere with the Licensee’s business in the frozen dessert industry generally, and in the distribution and marketing of Ben & Jerry’s products specifically.”

It appears that Ben & Jerry’s in Vermont and Unilever have previously violated the consent decree by “interfering” and also “contacting” Ben & Jerry’s – Israel about its locations – especially since those actions were not accidental but deliberate. It remains to be seen whether the attempt to coerce Zinger amounts to a criminal conspiracy to quietly violate both the consent decree and Israeli law. If so, prosecution and extradition could be on the horizon, and the central figures would be Ben Cohen and Jerry Greenfield, along with corresponding senior executives at Unilever.

Beyond Israeli law, there is applicable international law. A conspiracy to deprive the largely Arab eastern part of Jerusalem or the Arabs of areas A, B or C of Oslo of food may constitute an offense under the Fourth Geneva Convention. Article 55 states in its relevant part: “To the fullest extent of the means at its disposal, the Occupying Power has the duty to ensure the food and medical supply of the population; he must in particular bring in food, medical supplies and other necessary items if the resources of the occupied territory are insufficient.” An organized effort to refuse dairy products could put the executives of Ben & Jerry’s and Unilever in the crosshairs of international courts. People may laugh because the product is just ice cream. Today it’s ice cream, tomorrow it’s milk and the day after tomorrow it’s bread. Food should never be denied to a population. The discussion itself is disagreeable.

Poignantly, if Ben & Jerry’s of Vermont and Unilever stand before the bar of history, they might find a shocking verdict – one that would upend their very understanding of the land and the people they claim to be at the forefront. in their mind.

By way of history, for centuries Judea and Samaria were the very essence of Jewish identity. The very word “Jew” comes from the name of the country, Judea. In 1948, after the newly independent British Protectorate of Jordan illegally invaded Israel, the territory occupied by Jordan became known as the “West Bank”, referring to the left bank of the Jordan River. For generations, Jewish Zionists were known around the world as “Palestinians,” even at the United Nations.

Meanwhile, during the first six decades of the 20th century, the Arabs of Jewish Palestine vehemently denied the existence of a land called Palestine, or the very existence of a people called Palestinians, precisely because the Palestinians were Zionists. After Jordan invaded Israel, local Arabs decided at three major conferences – held in Hebron, Jericho and Ramallah – to deprive themselves of any independent national identity, choosing instead to become Jordanian citizens. Winston Churchill invented the previously non-existent country of Jordan by issuing a simple memo – known as the Transjordan Memorandum – to the League of Nations on September 16, 1922.

In 1964, after the Arab League, together with the Soviet KGB, formed the Palestine Liberation Organization, Jewish identity as “Palestinian” was co-opted by local Arabs as part of a Soviet-inspired agitation campaign. There is no trace of local, international or diplomatic documentation, and no titles, signs or use of names where Arabs in the region call themselves Palestinians or call themselves Palestinians – an identity they reviled. In the 1967 Six-Day War, Israel regained its original territory and name confusion took hold worldwide.

Fast forward to the Boycott, Divestment and Sanctions (BDS) anti-Israel movement, originally started by Hitler’s Nazis, adopted by the Reich-allied Arab Higher Committee during World War II, then expanded post-war by the reconstituted Arab League. A misinformed and misguided generation of activists perpetuated a false philosophy and false facts to uproot a democratic government and historic people by any means – from belligerence to boycott to food apartheid.

Despite incitement to hatred by the board of directors of Ben & Jerry’s and 21st century United Nations hate scholars, Judea and Samaria are not occupied territories. These are disputed territories, yes, but about 61% of them are internationally recognized as approved for Israeli control and presence, namely Area C, under the globally accepted Oslo Accords.

Ben and Jerry thought they could control who gets to eat what in the Holy Land. To borrow from their famous flavors, these two stocky half-baked monkeys might discover that a very rocky road awaits them.

Human rights writer Edwin Black is the New York Times bestselling author and award-winning “IBM and the Holocaust,” “Financing the Flames,” and other books. He hosts a weekly podcast on: TheEdwinBlackShow.com.