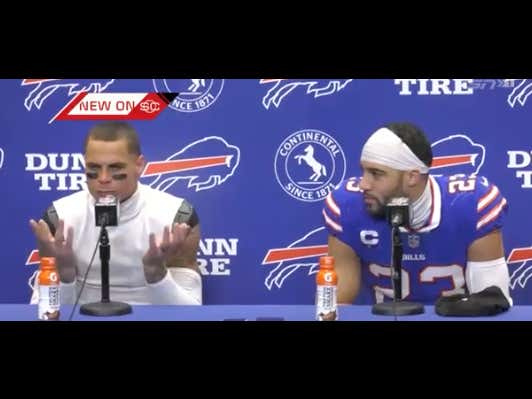 I understand that the bills are upset. I would be too if my Championship window was open for exactly a year before it closed in the most demoralizing way imaginable. But that doesn’t give you carte blanche to treat Big J reporters around the world like gum on your shoe for asking a simple question. The final score was 14-10, which Hyde and Poyer said apparently meant it was a close game? If they deny what just happened so much, they won’t be ready for Tampa and they sure won’t be ready in two weeks for the rematch without some fucking stupid lake wind and snow. It was panting in every sense of the word. Of course, the final score was 14-10, but Buffalo’s 10 points were handed to them through N’Keal Harry’s face and the refs put the Bills within shooting range. It was, for all intents and purposes, a shutout. Now that has nothing to do with defending the Bills, there’s not much they can do. And what they did was give the trio of Damien Harris, Rhamondre Stevenson and Brandon Bolden for 5.71 yards per sack, which allowed the Patriots to hold the ball for more than half of the game and to keep Josh Allen standing on the sidelines, twiddling his thumbs and wondering which receiver he could knock down his next time there. The Patriots never blinked, never deviated from their game plan even when the Bills were able to stop, and continued to swallow it down in Buffalo to secure the win and keep a grip on the division. . This is why this reporter asked if it was embarrassing that the Bills defense showed no life, no passion, no will to win. Sad to see the greatest yearlong dynasty in professional sports history end on such a bitter note.