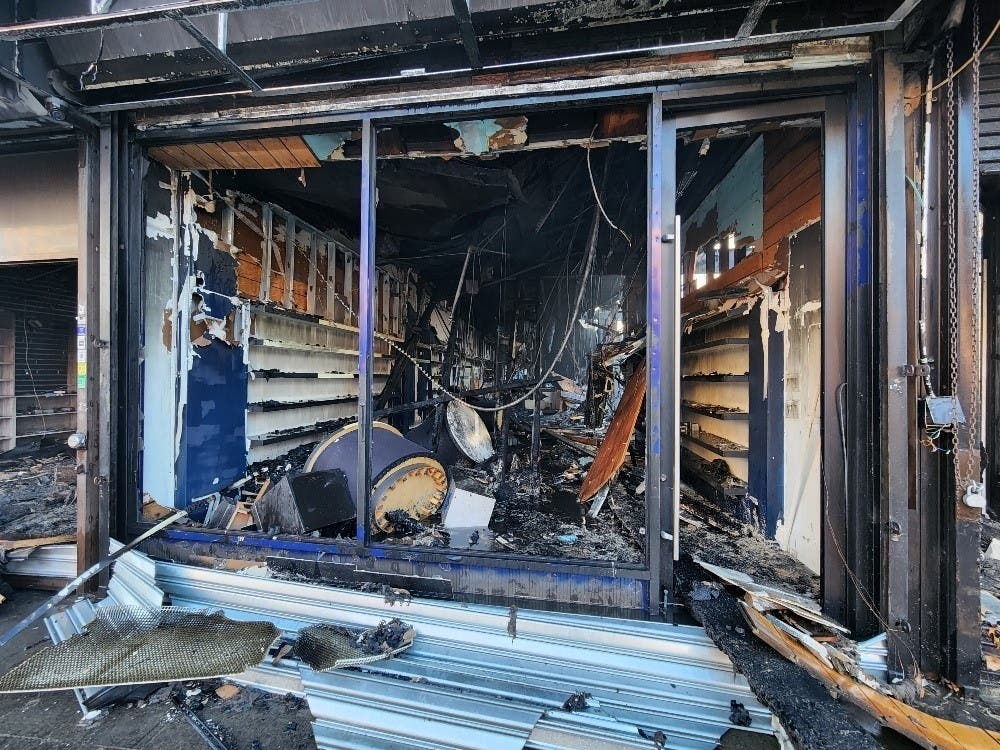 HARLEM, NY – The fire that destroyed a row of businesses last month in Harlem’s Lenox Terrace apartment complex was started deliberately, authorities say – a revelation that promises to further inflame speculation surrounding the incident for weeks.

The March 23 fire started around 5 a.m. in the empty one-story commercial building at 480-490 Malcolm X Blvd., at the base of the complex’s high-rise towers. It was the third fire to damage the building in recent years, following the one in October 2019 and another early morning fire last November that destroyed several businesses, including the beloved restaurant Manna’s.

A few days after the last fire, the city ordered the building to be demolished after it was deemed structurally unstable, and the site now stands empty – littered with rubble and surrounded by plywood.

Responding to Patch’s questions on Friday, NYPD and FDNY officials said the fire on the march was believed to have been intentionally started, with a police report indicating that an “unidentified individual started a fire” inside the building. (Both previous fires were ruled electrical accidents, according to firefighters.)

No arrests have been made, but an investigation is ongoing, an NYPD spokesperson said.

The disclosure comes amid rampant speculation in the neighborhood about the frequency of fires in the block. Councilwoman Kristin Richardson Jordan, who represents the area, tweeted last week that “the repeated fires at Lenox Terrace strike me as extremely suspicious”.

The 1,700-unit complex is owned by the Olinick organization. Since 2003, Olinick has tried to push through a series of rezoning plans that would allow further development on the site – the last of which failed in 2020 amid furious opposition from residents and elected officials.

“Residents have asked if Hampton Management has leeway to build the high-rises they are planning, with the current damage that has been done,” Richardson Jordan tweeted last week, referring to the property management arm. of Olinick.

Reached for comment on Friday, a spokesperson for Olinick called the fire a “terrible incident that could have been much worse, and we are grateful for the quick and courageous action of first responders who brought this fire under control without serious injury. “.

“We continue to work with FDNY firefighters to determine the cause of the fire and with our long-time commercial tenants to provide assistance and support,” the spokesperson said.

Authorities have not released any information on the potential suspects.

The now demolished commercial building is among the sites that were to be redeveloped in the 2020 rezoning plan, with Olinick planning a high-rise tower for the location.

This failed rezoning fueled fears about gentrification and the possible transformation of what had been an oasis for middle-class black families, with residents including political leaders Percy Sutton, Charles Rangel and Basil Paterson. Paterson’s son, former New York Governor David Paterson, was even swept up in the recent rezoning battle amid reports he had ties to lobbyists supporting the development.

Olinick did not respond to questions Friday about his long-term plan for Lenox Terrace, though the company has previously said it will pursue a smaller redevelopment if its rezoning fails.

Meanwhile, Olinick has come under scrutiny over allegations of tenant abuse at Lenox Terrace – the company paid tenants $1.2million in 2020 to settle a lawsuit claiming it deregulated falsely rent-stabilized apartments, and residents continued to complain of utility outages as recently as last month.