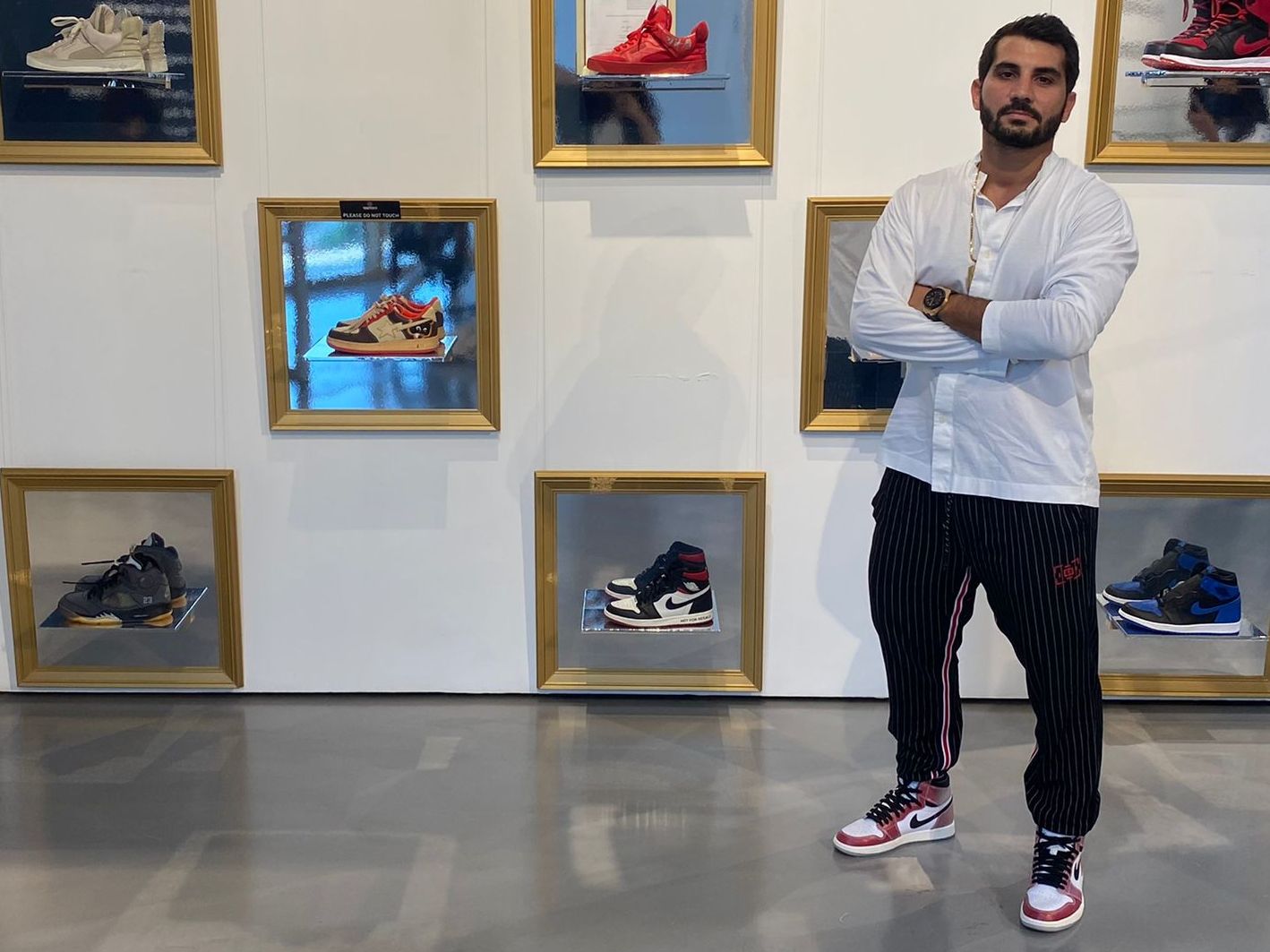 How Ali Khalifeh is stimulating Dubai’s sneakerhead community, even in times of pandemic

Holy Grail. It’s the term used by “sneakerheads” to describe their all-time list of the most coveted trainers. The impossible to get, with enticing price tags. Each collector has their own Grail and, once obtained, the shoes are closely watched. Usually.

Ali Khalifeh, the man behind youbetterfly, who opened in Dubai in 2018 and resells sneakers, sees it a little differently. For example, for the recent launch of the youbetterfly space within That Concept Store in Dubai’s Mall of the Emirates, Khalifeh turned his most valuable sneakers into a decorative wall element. “It was like walking into an art gallery, but for sneakers,” he explains. “Because that’s how I see it, personally.

“We saw this as a good opportunity,” Khalifeh said of the partnership with That Concept Store. “It’s a beautiful space, where you can do your shopping, eat, have a coffee, get together and play sports. You can do it all in one space and we believe sneakers are part of who you are.

“But we wanted to do it in a unique way. You can’t go to a sneaker store and see a pair of Jordan 1987s or Yeezy Red October; it’s not an ordinary thing to see. We wanted it to be. a mix of streetwear and high demand sneakers and the Vault, sneakers that have a story or a story behind them.

Sneakers may be mainstream today and created by luxury brands such as Prada, Louis Vuitton and Dior, but not so long ago they were the preserve of sportsmen, clubbers and skateboarders. For collectors like Khalifeh, they’ve been a magnetic pull since 1985, when basketball player Michael Jordan teamed up with Nike to create his own line.

“I really started at a young age, watching the NBA in Lebanon, seeing Michael Jordan and hearing reporters talking about his shoes,” Khalifeh said. “In 1997, I had my first Jordans. I literally begged my parents for them and every year I only had one pair of shoes. I used to wear them to every event, even weddings. And people would ask, “What are you doing? But it’s me.”

After studying computer science, Khalifeh moved to Dubai. Once in the United Arab Emirates, he devoted himself to strengthening his shoe collection. “At one point, I had 150 pairs. I literally spent my entire salary and bonus on buying sneakers.

Acquiring the latest shoes and owning the best streetwear has become more than just a hobby for Khalifeh. Realizing it was a passion running through his veins, he took the plunge, quit his job and founded youbetterfly. Khalifeh knew it would be more than just a store, but a way to bring the community of collectors together.

“I thought, why not? Let’s try this because there is no outlet for sneakerheads. At first he sold parts of his own collection (“it didn’t feel so bad,” he admits). But were there any that he later regretted getting rid of? Red October, he says. “But then I got them back.”

Created by musician and fashion designer Kanye West, the red octobers are widely accepted as a must-have for any serious collector and were launched in 2014 via West’s Twitter account. After the launch of two more Nike Air Yeezy 2s, the Red October were released without warning and had a limited edition. Since then, they have been in great demand.

“My very first bonus, I spent on Red Octobers,” Khalifeh laughs. “And I flipped this pair something like four times. If I have a good price, I would say I will sell. And once I sold them I was looking at my collection and I was like, I wish I had had the red octobers and if I get a good deal, I will buy them again. But this time, I’m never going to get rid of it. I keep them in my collection.

There are a few other pairs he’s also vowed to hang on to. “I have a pair signed by Kanye West from his Yeezy tour, and it’s crazy how they ended up in Dubai. There’s a video of West signing them. Someone threw them on stage, he got them. grabbed them and signed them. Now they’re there in my collection with a certificate of authentication and the video for proof. Then I have the Mars Yard 2.0 from an artist called Tom Sachs, “he says.

The legendary Nike Mars Yard 2.0 are remakes of a 2017 design, made from fabric used by NASA for the Mars rover, with details taken from the Apollo Lunar overshoe. To get hold of a pair, potential buyers had to take a NASA obstacle course dubbed Space Camp, then watch a Sachs art film. No wonder Khalifeh doesn’t want to part with it.

Based on a love of basketball shoes – even Khalifeh’s dog is called Nike – the youbetterfly space isn’t so much a store as it is a warehouse, in a decidedly old-fashioned neighborhood of Al Quoz. “It’s not a typical space, like in a shopping mall or in a trendy neighborhood,” he says. It’s home to a basketball court and even a graffiti wall, and visitors are welcome to hang out. This human connection is very important, he explains, to keep things authentic.

“Before I had youbetterfly, I used to camp to collect my sneakers [as soon as they were released in stores]. We were sleeping in the car. It was all about the hustle and bustle and nothing beats the feeling of having this pair at 7am while you’ve been awake all night.

“So that stays with me in terms of finding new pairs. I don’t search online except on eBay. It’s a small community, so we know who collects what. If someone is looking for something and I know someone, I put them in touch. Or people know what I like, so [they] send me some stuff and I choose what I want. This is how we do it, through community and relationships.

This same notion of creating for others has helped Khalifeh navigate the pandemic. “For the first two or three months, we had to close the store. Our products are super niche, so the first few months were really tough, ”he admits. Rather than sit still, Khalifeh set out to reshape the space.

“I changed the layout of the warehouse, we enlarged the space and we did it in silence. So when the country reopened, our statement was, “We never closed our doors, we just grew up. It was a good way to invite people to come to the warehouse to check it out, because we had a new space for them.

“Our community is small here in the United Arab Emirates and we all help each other,” Khalifeh said. “So it’s really nice to see the support around you and the people reacting to the milestones you reach. “

Energy infrastructure will need to be reallocated to move to a ‘net zero’ carbon future, Osler’s lawyer says