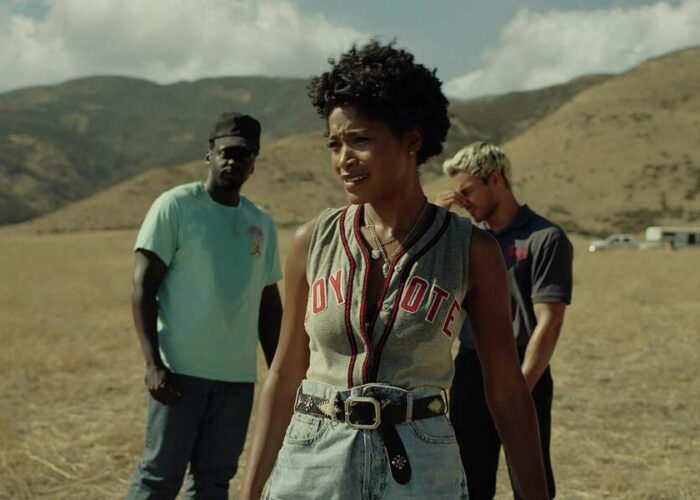 Keke Palmer on “No”, Jordan Peele and the appeal of being herself

Keke Palmer doesn’t want to be “one note”.

It makes sense: In two decades in Hollywood, she’s played everything, including a spelling champion, a stripper, a female slave and the first Black Cinderella on Broadway. In her new movie, “Nope,” she takes on the role of a Hollywood horse trainer who faces potentially deadly invaders. Naturally.

On screen, Palmer is committed to rediscovering herself again and again as she continues her chameleon streak through the company.

Since her big break as Queen Latifah’s niece in 2004’s comedy film “Barbershop 2: Back in Business,” Palmer, 28, has captivated audiences in movies, TV shows, through albums and albums. EP, and with live musical performances. At 20, she became the youngest talk show host in television history with the premiere of “Just Keke.”

Her likability has also made her particularly ubiquitous on the internet. A soundbite of her greeting Megan Thee Stallion at last year’s Met Gala – where Palmer hosted the red carpet cover for Vogue – became the backdrop for a trendy TikTok tune. And the Emmy-winning actress saying ‘Sorry to that man’ when she didn’t recognize a photo of former Vice President Dick Cheney during a 2019 lie detector test with Vanity Fair is has become a staple of social media.

Whether on set or online, Palmer’s personality is contagious, as seen in her performance in “No,” which was met with rave reviews and joyous anticipation.

Palmer stars as the spunky and enterprising Emerald Haywood, the nosy sister of Daniel Kaluuya’s quieter, more serious character, OJ, in the latest film written, directed and co-produced by “Get Out” filmmaker Jordan Peele. The horror film follows the duo as they attempt to capture evidence – and monetize their discovery – of a mysterious flying object that has terrorized their family ranch. To do so, the siblings must put aside their contradictory behaviors and enlist the help of electronics store clerk Angel Torres (Brandon Perea) and cameraman Antlers Holst (Michael Wincott).

Palmer spoke with The Washington Post about the many jobs she has, the downsides of living superficially, and why working on her first Peele project was so refreshing.

Q: How is the role of Emerald Haywood different from your other roles? Why is it important that characters like her be portrayed in movies?

A: Emerald exists in life. I think it’s so important to show diverse black female characters. In my life, I’m also the kind of woman who wavers on both masculine and feminine energy. I shoot both ways, and I think most of us are that way in life, regardless of gender. It is also very important to show it in the cinema and on television. I really like having a character that redefines what people think of women.

It also played into my balance of what Emerald’s strength looked like, because she’s not just strong. It is soft. I think that’s also important as a black woman; I don’t want to be a note and be attached, because that’s a boring stereotype.

Q: You also talked about colorism in the entertainment industry before. What does an opportunity of this magnitude mean to you?

A: I’m not the first or only dark-skinned woman to have been given opportunities on this scale, but I think it continues to redefine the concepts of what is beauty, what is power, and what is power. what it means to be a leading woman and someone who is seen as a fierce leader.

All of these different levels of representation are important. People see themselves on screen or see people who relate to them, and it continues to give positive reinforcement. This does not mean that everyone [story] it must be like that. But I think when it comes to something like that, we have a lot less than I think we should and could, so I’m just grateful to be a part of it, to be able to play in that space.

Q: You were looking forward to working with Jordan Peele. What attracted you to his work and what was it like on set working with him?

A: He is so caring and he has something to say. I’m really attached to Peele’s films: his approach to cinema is very much like that of an artist, like someone who has made a painting or sculptures. It’s very open, but there is a direct view. It’s specific. When you really dive into it, you’ll find that each hit was tied to the next. And even still, inside of that, it’s up to your interpretation. It’s so unique.

I can be very journalistic and observational. I think there was a half of me that was really watching, learning, and creating the mentorship space to learn from the relationship Jordan had with his producers and…actors. It felt like going to art school, and I got an internship to watch Jordan Peele shoot a movie.

He empowers the other people on set. He has a clear vision, but he also trusts the people he hires. As an actor, I just wanted to make sure that I was listening and that I could tell his story, because I also really believed in what he was trying to do. It’s just a very cool and genuinely collaborative process.

Q: What do you hope people will take away from this film?

A: There are several of them. I would love [for people] to take away the brother and sister relationship, and how beautiful some of these platonic relationships are in our lives: the ones we take for granted, the ones we don’t necessarily call until you really, really need them ; the people who really know us and who see us.

I want people to see the value of that instead of the value we place on being validated, being popular, or creating a moment for ourselves. The kind of vision we really want doesn’t come from popularity. These are real connections.

So what [I want people to] know how exploitation is not great. We need to be more aware of our intentions when it comes to the things that captivate us and how we interact with them. What does that really say about you? Seeing something – whether beautiful, scary, miraculous or intriguing – what does it say about you that your first step is to exploit it?

Q: You are versatile and wear many hats. You are an actress (“Lightyear”), producer (“Alice”), host (“Password”) and show judge (“Legendary”). What would you say is your favorite right now?

A: I like that you say “right now”, because that’s exactly how it is. I really feel like hosting and producing personality, because I really feel like myself and myself more than representing someone else. Even though my personality in hosting is still a performative aspect of who I am, it’s a bit closer to who I am than playing a character or role.

The producer aspect really allows me to be more [toned]-down version of myself, which is also awesome. I’m in a regeneration phase where I’m trying to rejuvenate myself and prepare for whatever the next tough thing might be on camera, and expand my skills into other areas. Because I know it will only make me a better artist all around.