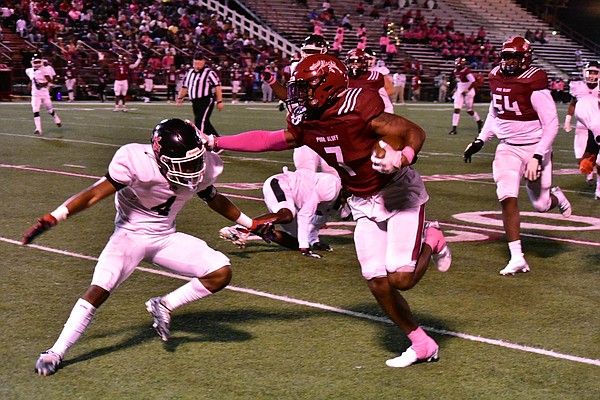 The Pine Bluff Zebras scored the first touchdown Friday night against the White Hall Bulldogs and never looked back, winning 32-16 in the teams’ first-ever meeting.

Both teams’ offense and defense were evenly matched until 7:49 left in the first quarter, when Zebra senior quarterback Will Howell started hammering.

Howell completed a pass to junior Austyn Dendy at the 36-yard line and then back to him at 5. That set up Howell’s touchdown pass to Jordon Harris with 6:12 left. The 2-point conversion was not good.

The second quarter started with Bulldogs defensive coordinator Hunter Vincent’s line on fire to hold off the Zebras. The strategy worked.

But the Zebras defense tied the Bulldogs until Jayden Smith completed a 45-yard pass to James Thornton for a touchdown. Bulldog Hector Murillo’s kick was good. The Bulldogs led 7-6.

It was anyone’s game.

With 2:09 left in the second quarter, Zebra quarterback Will Howell threw a long pass to Dendy, who zigzagged through the Bulldogs defense to score a touchdown. The two-point conversion was good and the Zebras led 14-7 before halftime.

THE GAME CHANGED WHEN…

The Zebras stormed out of the locker room early in the third quarter.

With 9:58 left in the quarter, quarterback Landon Holcomb passed the ball to Blake Hegwood for Pine Bluff’s third touchdown of the night. The two-point conversion was not good, but the Zebras led 20-7.

The fourth quarter was quick and intense. The Zebras managed to break up Bulldog’s passes, but White Hall recovered with senior Christian Townsend scoring a touchdown to make it 26-16.

With less than 2 minutes remaining, Holcomb kicked the ball into the end zone for the Zebras’ final touchdown to make it 32-16.

The Zebras will play their last home game of the regular season on October 21 against the Morrilton Devil Dogs. The Bulldogs play their final home game the same night against the Vilonia Eagles.